It turns out that JB neglected to mention two things about today’s hike until we were well into it.

I believe that both not-so-accidental oversights were attempts to avoid intimidating my flabby citified self. I don’t think he needed to bother. By mile 3, my mind was much too focused on respiration to bother with intimidation. 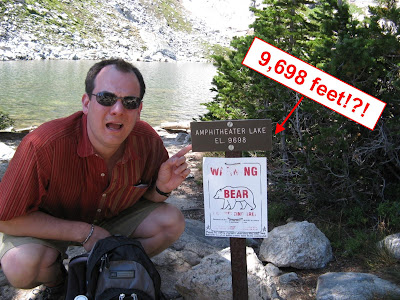 Maxed out heart rate and all, the trip was more than worth it.

In need of serious refueling and hydration, we made a beeline for a joint on JB’s must-visit list: Billy’s Giant Hamburgers.

Now I can’t say for sure what impact the afternoon’s exertions had on my opinion, but Billy’s might just be serving a perfect burger. 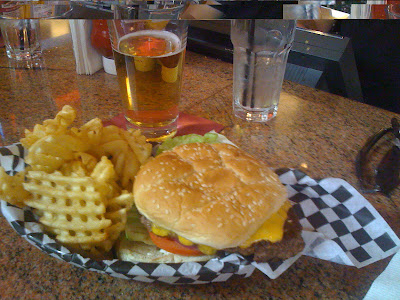 This admittedly isn’t rocket science, but it’s remarkably hard to find a place getting it right. Billy’s is one of those places. Their half-pound chuck patty is gently formed and tastes like grilled beef – not liquid smoke, not some “secret blend” of spices, but simply good quality well prepared BEEF. The cheese actually adds flavor instead of just fat. Nice fresh tomatoes and iceberg lettuce provide texture contrast. Just a shmear of mayo helps hold things together with a hint of richness. And finally, a bun robust enough to avoid falling apart without getting in the way. This is a truly great hamburger.

Okay, let's talk about the fries, since I'm the non-beef eater. Whassup with the criss-cross fries? Why not just good 'ol fashioned shoestrings? Were the fries any good?

Sneaky, sneaky! You were HAD. But admit it, it was for your own good. All those endorphins will make you a runner soon enough!

Lizzie: Anything to justify another one of those burgers!

Pleen: The fries were pretty good. Nothing wrong with them. They were NOT as great as the burgers themselves.