Charging (or rather “Chasing”) Windmills

We departed Aberdeen aiming to head over the border into North Dakota. On a site about 30 miles west of Ellendale, 120 of the massive turbines we saw under construction two days ago in West Branch, IA harness the never-ending gusts of the high plains. The 180 megawatts of no-emission electrical power they produce is enough to power ~ 50,000 homes. We had a date for a tour from the site manager.

Our progress, however, was not completely smooth; as you may be able to tell from this video.


It turns out we were still on the SOUTH Dakota side of the border where there exists an unpaved state road with the exact same name as the one we were supposed to use on the NORTH side of the border. Being highly educated and experienced travelers, we eventually realized our error after the dirt road turned to a narrow track through high grass and the track petered out all together. We're quick like that.


The good news for us was that 262 foot tall turbines spinning 122 foot blades are relatively easy to see from a distance. So we followed our noses and arrived only a bit late. 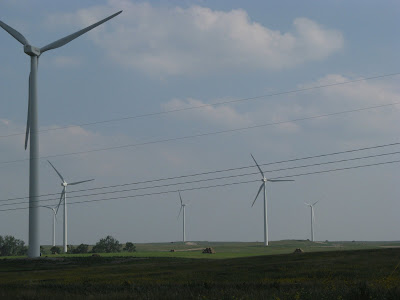 Suitably impressed by the site and, moreover, the crew, we made for the state capital at Pierre. Unfortunately, Pierre’s size and culinary selections are . . . modest. But we lucked out and found La Minestra slotted in among $1 draft joints and all-you-can-eat buffets.

The quiet little place was winding down from a weeknight dinning service, knocking out casual Italian. Pizzas start to order from a ball of dough, and freshly sauced pastas jump through the hot pass. The crew behind the counter was getting ready to call it a night, but turned out a couple of quite good salads and a more than serviceable pie. Most places 1000 miles closer to Brooklyn have trouble turning out a thin crust NY style this good. 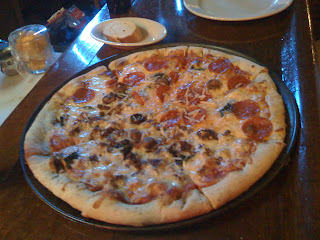