So dinner the other night was a reminder of why I love living in NoVA, why the best stuff happening in the DC metro area is in the suburbs, and, ultimately, why America is a great place. A pretty impressive achievement for a simple Monday night dinner with friends.

We met two other couples for dinner at a joint in Annandale called Star Lounge & Ballroom. Theoretically the type of place you rent out for a major function, it also apparently operates as an Afghan restaurant. Who could pass that up!?

Finding the place easily right on Little River Turnpike, we entered and immediately had the feeling we were in a Soprano’s episode (albeit one dubbed into Dari). The CAVEROUS ballroom/bar area contained not a soul. The little room off to the right of the entrance held several bearded guys of indeterminate age huddled conspiratorially over coffee. One of them ducked out the back of the little room and reappeared through a door by the bar (“Ta-da! Now we are restaurant!”) ushering us over to some tables. Menus were produced, ice water appeared, and I am sure cooks were rousted from their dice game in the storage room. BJ asked, “How do you say ‘money-laundering-front’ in Pashto?”

Within minutes we had our lime-wedge-capped Coronas (what else to you drink with Afghan food?) and our conversation was echoing through the chandelier-lit chambers. Appetizers were brilliant. Aushak filled with lovely fresh scallion and oddly, but pleasantly, crisped on the bottom (like Chinese jiaozi/jiānjiǎo/potstickers). More delicate mantu with flavorful ground meat filling. Beautifully executed sambosa served as one giant pastry rather than individual portions.

The entrees were less impressive, but good. Nicely done meat dishes with surprisingly flavorful accompanying rice. The bread was a bit too soft for my taste, but that’s just a personal preference. All-in-all, the food is better at Bamian over in Bailey’s Crossroads, but Star is a trip. The people could not have been nicer. Service was quick and efficient. The guy running the floor shook my hand on the way out and thanked me for coming by.

Yea, I forgot to mention the DJ who appeared midway through our meal. He began spinning salsa and individual people began wandering in and ordering drinks. Turns out we had wandered into the “Miami Monday” at Star where, and I’m quoting from the flier here, “El Gringuito Teaches You to Flirt with Salsa & Seduce with Bachat” (Don’t believe me? Check out: http://photos2.meetupstatic.com/photos/event/8/d/8/6/highres_4476230.jpeg).

So after Afghan food, Mexican beer, and suburban salsa taught by a white boy, what could we do for dessert except Korean tangy yogurt?

Just down the block from Star is a Korean bakery called Shilla that we’ve been meaning to try. People say nice things about their baked stuff and coffee. Having recently learned that they served their own tangy yogurt, however, we had to make a stop for the sake of science (see: “Tangy Yogurt Jihad” above for more details on why). Long story short, the place is great for people watching (too-cool Korean teens & too-coffeed Korean moms), and the bakery items are lovely in that Asian-take-on-Euro-confectionery way. The coffee is made without human intervention, save for turning loose the cartridge-fed automated machine - but my cappuccino was tasty.

The tangy yogurt actually reminded us of Mr. Yogato, except for the fact that it was presented by Koreans. What do I mean? Oh just that each INDIVIDUAL RASBERRY is placed on the yogurt by hand in a geometric pattern. 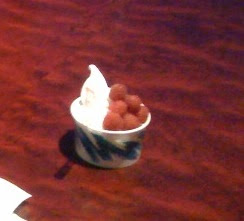 RS managed to kill his entire serving in about two minutes flat despite the miniature Asian sized equipment. 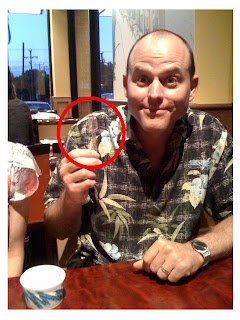 So the evening didn’t provide a new favorite Afghan in the area (that’s still Bamian or Food Corner for me) or a challenger for the reigning tangy yogurt champ. And I sure ain’t hurrying back for Monday Night Salsa. But it did drive home the fact that the world is at your doorstep in the DC suburbs.

The Afghan Salsa restaurant experience was something special. A few thoughts and recommendations: The experience would have been "much" better if the building had no roof. Additionally, a few thousand flies dive bombing the entrees would be pretty classic. Why not add a pissed off camel; preferably on the dance floor, spitting camel juice in Veronica the Salsa instructors face. As for a recommendation: If the waiter would have been wearing a stolen TSA shirt, while clinging tightly to an AK, "I would certainly recommend the place." For now, take a pass and head on over to 5-guys, the best burgers and fries in town.