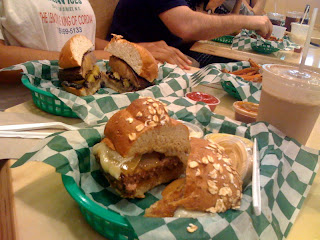 So, in the wake of my experience at Ray's Hellburgers, I wanted to check out a few other places people mention as Five Guys alternatives. My buddy SV and I hit Big Buns in Ballston today after hearing good things.

I don't need to go back. If I want a good burger, Ray's is still my choice; and I might even head to Five Guys before Big Buns

Good news! They have fries and they have beer (highlighting the limitations of Ray's). The place is comfortable. The service is fast, friendly, & efficient. The prices are reasonable.

The beef burger on wheat bun w/pepper jack & sautéed onions was nicely prepared (they didn't ask how I wanted it cooked) and flavorful. Unfortunately the hugely thick and seriously mediocre wheat bun loomed over the experience of eating the burger. It also overshadowed any flavor that the cheese might have had.

The portabella "burger" on white bun with black bean mango salsa & grilled pineapple was a generous (almost comical) slab of mushroom. It was grilled nicely. The salsa was fine, but the black beans themselves had an undercooked texture and distracting flavor. The mango made little contribution. The pineapple was a nice touch but there wasn't enough to accompany each bite of the monstrous 'shroom.

The sweet potato fries were the one thing we dug without reservation. They were well prepared – flavorful and non-greasy. They also made useful tools for sampling the various dipping sauces offered at the counter (sweet chili vinaigrette, honey mustard, etc.). We liked them all.

The conventional fries were underwhelming. They had little taste, a fluffy interior (I know people disagree about the desirability of this trait in a fry), & no snap or crunch.

The chocolate shake was probably the biggest disappointment. It was hyper sweet and a weird powdery aftertaste asserted itself strongly. While I am not doctrinaire enough to assert that proper milkshakes must be made with ONLY vanilla ice cream, milk, and chocolate syrup, I DO think that many of the failed efforts I encounter include "enhancements" other than these basics.
And there's the parable to contrast this place w/Ray's. Ray's Hellburger and Ray's the Steaks both seem focused on doing one thing really well through a simple approach using a small set of high quality ingredients. The burgers at Ray's didn't need any three-ingredient salsa because the burgers were so damned well done and made from killer quality meat (Hint: Big Buns is using the made-up branding-drivel term "Angus" to describe their beef). Their root beer floats are made with good vanilla ice cream and good root beer. Etc., etc.

Summary:
Nothing wrong with the place if you're there and a burger is what you need. However, I would not consider it a destination. I'd get a simple burger there and probably ask for it without the bun (they'll put it on a bed of greens if you want). I'd use my carb quotient on a beer or perhaps some sweet potato fries.
Posted by Jawper at 7/16/2008 03:01:00 PM