After a breakfast of leftovers and some last minute packing of the vehicle, we departed Chicago and headed west out I-88.

Stopping off in West Branch, Iowa to see how they build wind turbines (these suckers are BIG!) put us within striking distance of Omaha, Nebraska. 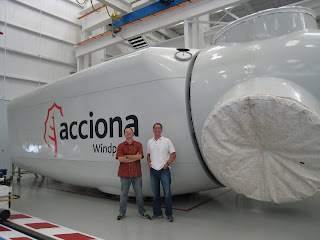 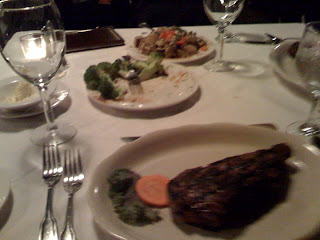 In all honesty, Omaha Prime underwhelmed at first. The place may have been there forever, but it has all the ambiance of a conference room at the Holiday Inn – complete with hotel banquet room folding tables and chairs camouflaged with slip covers. Still, the service is kind and knowledgeable and the bar is speedy.

Now let’s be clear, this is not “New American” cuisine. There is no subtlety here (as you can tell from the harshly handled vegetables). This is the food that comes from a surplus of high quality ingredients that can be treated simply and shine. If you have god’s supply of beautiful beef, a grill and an oven, you don’t need a tapenade of anything. Similarly, their simplest salads - with surprisingly flavorful tomatoes – and sides – potato anything worked well – provide nice accompaniment to the steaks.

And oh what steaks.

We were already mentally preparing ourselves for a “just OK” meal due to the surroundings and such when the 14 ounce New York strips arrived. They looked competently done and we cut into them with a rather laissez-faire attitude. It took about two bites for us to realize what we were dealing with. JB glanced over at me without putting down his cutlery and mumbled softly, “This is a REALLY good steak.” 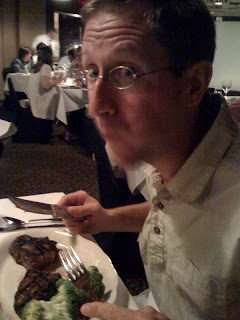 That was the last bit of conversation for a while. These steaks compelled concentration. The rate of consumption slowed. An occasional affirmative grunt received a head nod in reply. Cuts were made with care. Chewing became deliberate as each bite was savored – an exploration of texture and flavor and fat. These were REALLY good steaks.

Deserts were steakhouse portions of perfectly good sweets. Coffee and tea helped close out the night. But the steaks were still at the forefront of our minds as we happily strolled back to the car.

In a world filled with chain steakhouses on every corner, smaller finer venues from Peter Luger’s to Ray’s the Steaks, is this worth a trip to Omaha, Nebraska? I’m not sure. But if you’re anywhere nearby, Omaha Prime is a treat to remind us what all the fuss is about in the first place. Theirs is a REALLY good steak. 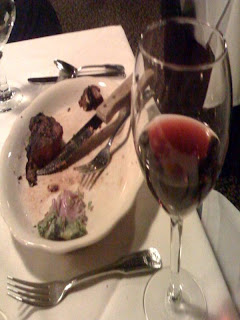