So, we know NOTHING about Korean food. Given that we live down the street from an enormous concentration of Korean eats, this always strikes me as a shame. Thus, imagine my excitement when Pleen agreed to go chowhounding around the back lots along Little River Turnpike.


We were running errands and needed something hot for lunch. Before falling back on a tried and true pho place along our route, we decided to snoop ‘round the back of a block just west of Annendale Road. We saw a storefront wedged between a dodgy looking gaming room and a hair salon. The sign said “Korean porridge”.
Porridge? Hmmm. The Chinese do great porridge. The Japanese versions are a bit more refined. But Korean porridge? Well, one way to find out.
Bottom line up front:

Wow. This place is impressive. The food kicks butt. The place itself is sparkling clean, contemporary décor, brand new. We’ll definitely be back. 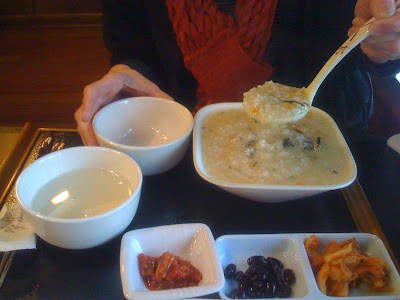 Now, as romantic as it may seem to be an explorer of other cuisines, the fact of the matter is that NoVA is so multi-ethnic that everybody’s eating everybody else’s food. You’re never the only outsider in a restaurant. Hell, all the best Vienamese joints have their menus in Spanish since so much of their trade is Hispanic. Well, we were the only non-Koreans in Dduck Sa Rang.

The menu had English translations, but they were pretty non-explanatory. Still, the food on other tables looked good. We smiled, pointed, shrugged, questioned, and got what we thought was an appropriate order going. When the food came, it was accompanied by the restaurant’s owner. He quickly demoed how to serve and consume the various dishes and left us to it.

Porridge and a few accompaniments is a relatively simple meal. Still, the preparations showed care and even elegance. The banchan (side dish) included what I assumed were soya beans softened and dressed in a sweet-ish glaze, a conventional sour and spicy kimchi, a sweeter spicy kimchi, and a bowl of clear brine referred to as “white” kimchi. All were useful in highlighting the gentle flavors of the porridge. The white kimchi in particular was absolutely elegant.

But the main event was definitely the porridge itself. Pleen’s was mixed with vegetables and mine with veggies and tuna. The flavors were mild and fresh and remained distinct rather than being subsumed into the background. I had to force myself to take small bites as the soft porridge chased away the chills of the wet afternoon. While the ingredients and presentation were novel, the dish struck a familiar and comforting tone. This was universal comfort food.

As you can seen, it went down pretty easy 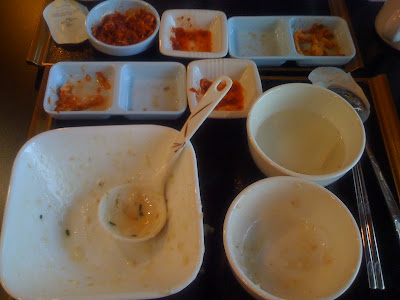 And Pleen’s attitude towards Korean food? You be the judge. 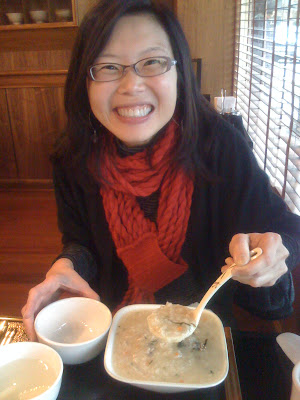 Nice story as for me. It would be great to read a bit more about that theme. Thanx for sharing this information.
Sexy Lady
Female escorts