Pleen and I ventured to the posh Donovan House Hotel today to try Toronto chef Susur Lee’s first DC venture, Zentan. Although “Asian-fusion” can make for some eye-rolling material, Lee’s a dude who should be able to pull off some goodness.
Bottom line up front: We’ll give the place another try before we make up our minds, but we’re not blown away. However, there’s lots more of the menu to try. Our general take-away? Dishes tended towards one-ingredient-too-many.
The very cool looking Singapore Slaw of 16 ingredients (including hazelnuts and salted-plum dressing) is basically a very chic lo hei. This was a nice start - light and refreshing in texture and flavor. Perhaps a tad too sweet in the dressing and simultaneously a bit over salted (odd I know). The hazelnuts in a dish whose street-food ancestors usually use peanuts were a very nice touch that raised the level of the whole dish. 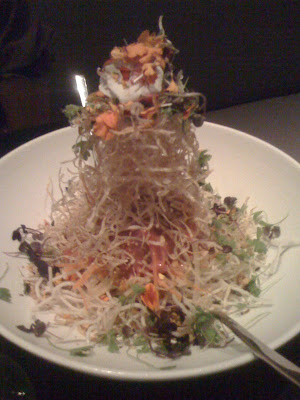 The Almond-Crusted Vegetable Dumplings with Swatow chili dipping sauce were . . . fine. Actually, the filling of mushroom, fungus, celery, etc. was lovely. But the dumpling skins were surprisingly western; which is to say about five times thicker than one would expect from an Asian dumpling. This was the glumpy doughy dumpling skin one expects in American-Chinese joints – not from the kitchen of a chef who started his career in the dumpling Valhalla of Hong Kong hotel kitchens! The chili sauce didn’t arrive until long after the apps were cleared and we were half-way through our mains. 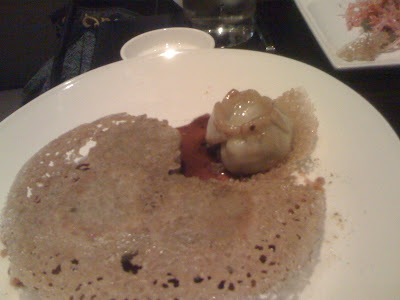 Pleen’s entrée: Caramelized Black Cod w/ preserved vegetable & mustard relish. This was a beautiful piece of fish perfectly cooked. Gotta say, I think the mustard actually detracted. Bites without the mustard allowed you to really get the flavor of the fish and the glaze. Oh, and what's with the lemon alongside a piece of caramelized fish? 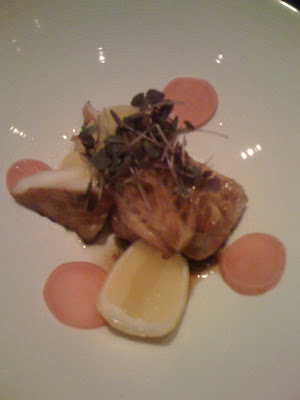 My Mongolian Lamb Chops w/chili, mint, carrot, cardamom, peanut chutney, & glazed banana. Again, a wonderful quality ingredient cooked just right. Splendid chops. The peanut chutney was a fun idea, but puddled alongside the mint, it got confusing. The mint quickly became subsumed by the peanut and you were left wondering what the point was supposed to be. The bananas were hyper sweet and might have worked well if there were actually any chili flavor to offset. 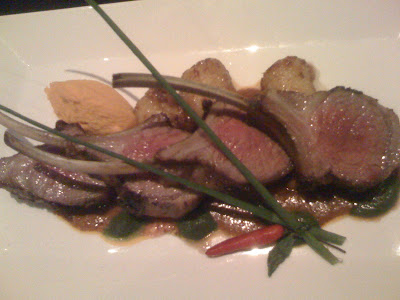 Sorry to hear that you weren't blow away. I would have expected the place to really rock, to be a great dining experience, not just good.

The big name restaurants by "celebrity" chefs don't seem to be offering food that is as good, or as good a value, as so many of the mom and pop places in the area.

May be too many "celebrity" chef restaurants in the area? Too many that aren't living up to their reputation?