Last night in town. Can’t leave without chili crab from Long Beach. Turns out the original location on the east coast off the airport road is gone. They’ve opened at Dempsey Road.

We cab over to the redeveloped former barracks now studded with wine bars and galleries. I’m preparing for disappointment.

Guess again. Despite the posh surroundings (and clientele!), the meal is to-die-for. The veggies are smoky emerald goodness. The bamboo clams succulent with mounds of garlic. But let’s not kid – we’re here for the crab. We’re looking to make an impression on the two kilo Sri Lankan monsters trying to crawl out of the tanks over there. No more small talk. Bring them to us!

The first one appears resplendent in a sauce of crushed black peppercorns (crab au poivre if you like). The platter’s so laden that the server can barely control its fall onto the table. There's a cheer from our table. Chopsticks flash. The sweetness of the crab meat hits like a physical force - the accent of the black pepper almost too much to bear. Someone ’s moaning - I hope it's not me. 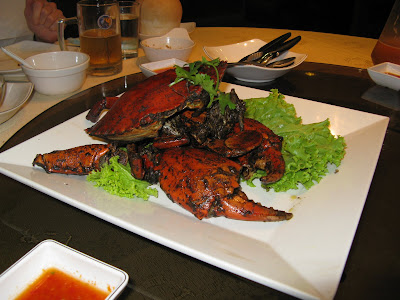 Another pitcher of beer appears. Conversation dulls. I’m aware of Ricky sucking the sauce off of an emptied claw. Now a second crab. Big as the first, but dowsed in the classic sweet red chili gravy. Roasted buns to sop up the sauce. 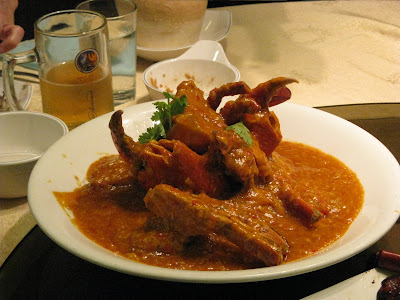 The table is fully focused. Pleen’s not speaking. 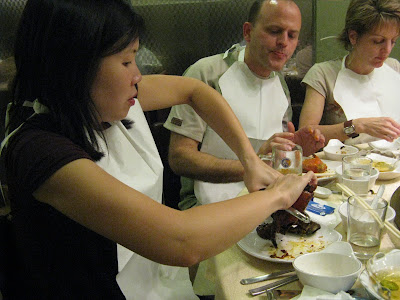 Soon enough we’re licking the bottom of the platter. More beer. Some deep breaths and perhaps a sigh. Nini’s wiping sauce from under her nails.

A few looks are exchanged. A nod. Mute agreement. Pleen’s rapid-fire Cantonese grabs the head waitress. She makes for the kitchen. Another armored carapace departs tank for wok.


Arriving at the table minutes later, this preparation is new to us. Colossal claws rising from the platter are dressed in creamy Sarawak white pepper. I’m swooning. The flight here takes 20 hours. This single crab is reason enough buy the ticket. 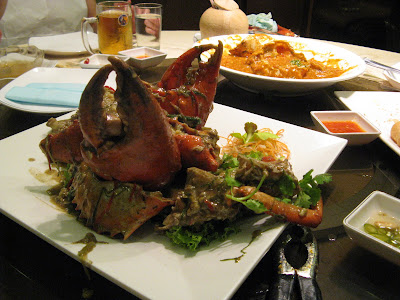 Drained from the taste buds down. Grinning like drunks. We stumble out of the restaurant to take a poor man’s tour of the island on the way home. The #174 bus offers an air-conditioned top deck view of the lights of Orchard Road for $1. It drops us a couple blocks from the hotel and we shamble to our rooms to sleep off the crab. We’re bound for Kuala Lumpur tomorrow!